Abruzzo is never far from my mind.  I am planning a trip of my own later this year. But, as always in April, my thoughts turn to my late mother Louise Pergolini Tucker. She would have been 89 this week. Not only was she born on the 10th of April but she also died on her 81st birthday. So the date holds even more significance and bitter-sweet memories.

Ironically, our mother never visited Abruzzo, but she was our link to her parent’s place. We are connected by a long line of people with the names of Pergolini, DeAngelis, Mezzacappa, DiRocco, Fagà, Marini, Marani, Ettore, Tassone. Villages like Morro d’Oro, Rosburgo, Montepagano, Montorio al Vomano, Notaresco, Scoppito, Roio Piano and more.

Through the years photos kept our migrant grandparents in touch with their family. Travel was not easy, money was short.

The first picture below shows our great-grandmother Sofia DeAngelis with her youngest child Vittorio Pergolini taken in Roseto degli Abruzzi. Vittorio was born in 1910, a year after his older brother (my grandfather Giovanni – John ) left for America. The brothers met 50 years after this photo was taken. Four of Sophia’s six children emigrated to ‘L’America’.

The next photo is of our mother’s grandfather Nicola Mezzacappa,  from Morro d’Oro, Abruzzo, pictured on the front porch stoop at Thompson Street, Philadelphia in the 1940s. He left his wife behind until he got settled, then sent for his family, which included my grandmother.

The third photo shows the brothers: my grandfather John, my grandmother Anna Mezzacappa and Zio Vittorio. It was taken in Rome when John and Anna made their one-and-only trip back to Italy in 1963. The brothers first met on this trip.

The last photo shows more of Louise’s Abruzzo influences. Her own mother, our grandfather’s brother’s wives and a neighbour at a beach house in Delaware, cleaning up after a clamming expedition and meal, no doubt. 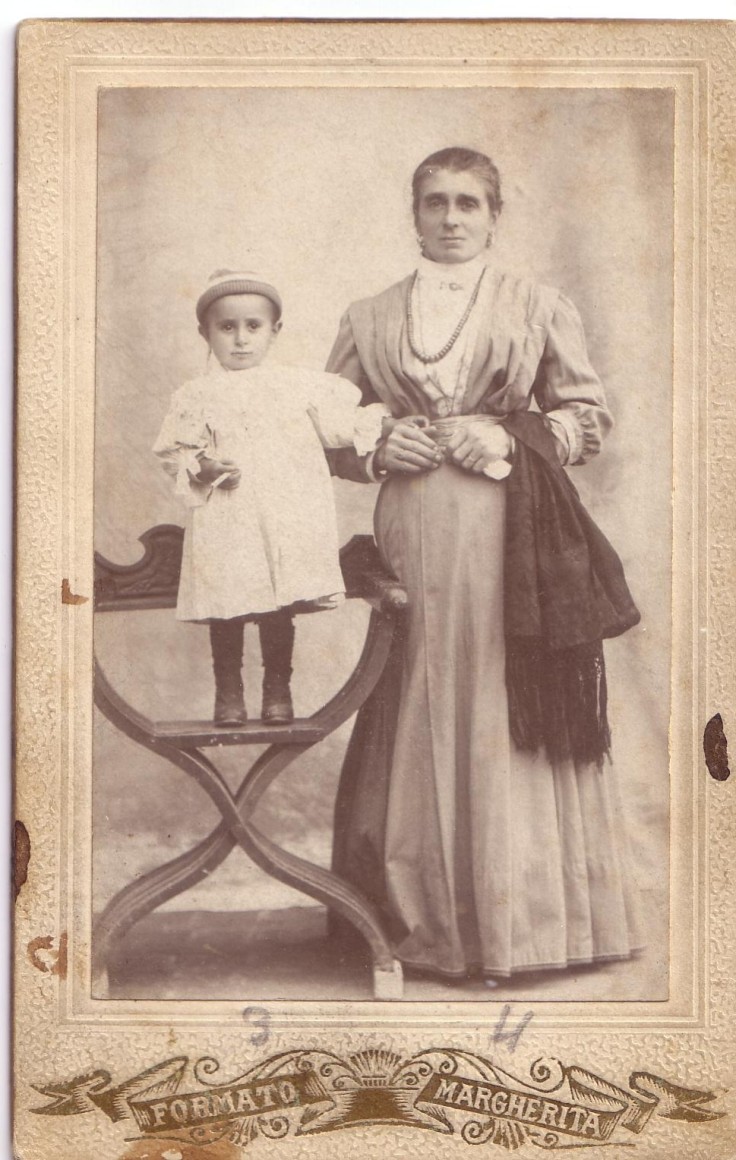 It’s almost unfathomable to us now, with ease of travel and modern communication methods, that brothers could not meet until they were in their 50s and 60s. But they wrote affectionate letters and sent photos back and forth to maintain the relationship. Thanks to the relationships they kept, some of us have been fortunate to meet our mother’s cousins and their children and grandchildren. The journey of discovery, not only of our family but of the beautiful rich culture of Abruzzo, continues.

For all of our mother’s modernity, forging her way in the new world, there was no denying her Italian roots. Last year, before I started this blog, I wrote on my other blog about Louise’s love of Mussels. Soon after, on this blog, I wrote about the connection with her heritage symbolised by the dish Scripelle ‘Mbusse. Food is surely the biggest connection to one’s heritage.

I’m reminded of Louise’s resistance to making lasagne because it was so labour intensive. After all, she had six children, a part-time job as a nurse and a home to run. But we always convinced her to make lasagne for special occasions. She didn’t make her own pasta though. No, she was a modern woman who knew where to buy the good stuff!

Her lasagne was truly worth the wait. She never used a recipe. Feeding a large family was intuitive for her. For quantities, she worked back from how many people she needed to feed on the occasion. Then she doubled it in case any unexpected guests arrived. Nothing could be more embarrassing than to run out of food!

Louise’s lasagne was a tightly packed, multi-layered affair, and in hindsight was more like a timballo. Traditionally a timballo from the Teramo region is made with super-thin crepes (crespelle) instead of pasta. However, Louise used layers of fresh egg pasta, mozzarella, a homemade tomato sugo (starting with ‘un soffritto’ of garlic, olive oil, carrot, celery, onion and herbs) with minced (ground) beef, some vegetables like zucchini or eggplant if in season and topped with more mozzarella and pecorino cheese.

It’s surprising that I don’t have a photo of my mother’s famous lasagne to show here. Maybe one of my siblings has a photo of the Christmas table to share. If you’re reading guys, send me your photos!

Instead of Louise’s lasagne, I will show you our modern American mother of Italian heritage, caught between cultures and managing both with great legs, and a martini…or two. Salute!

12 thoughts on “Abruzzo and my mother”