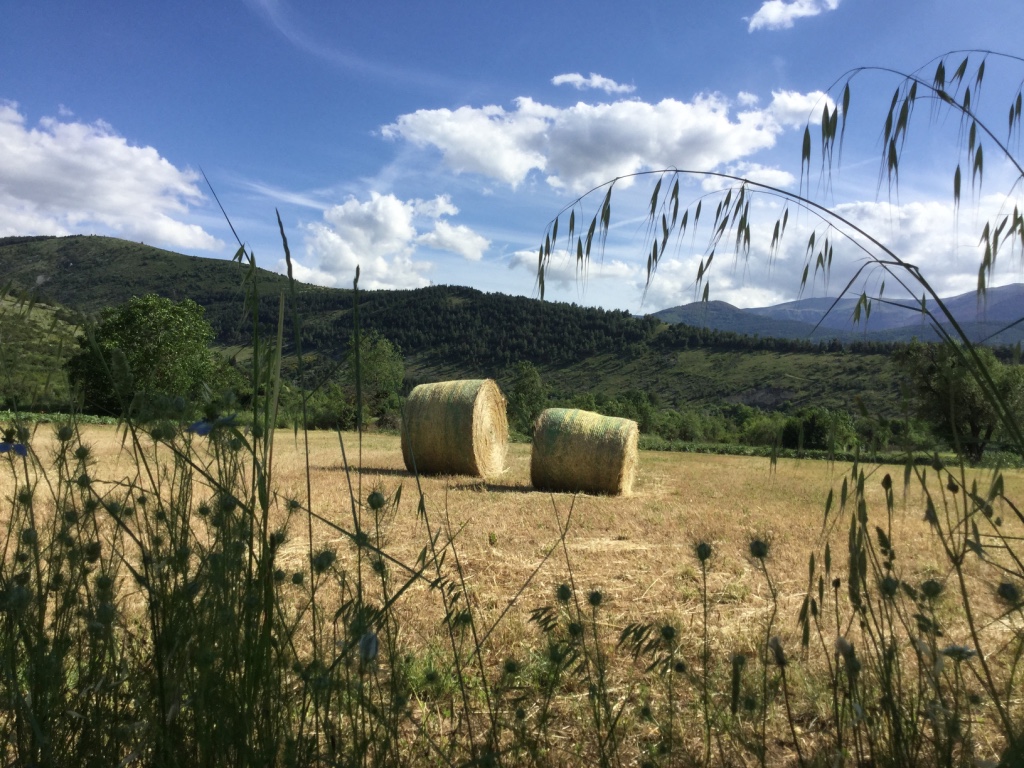 On a dark and very rainy day in 2013, I first visited Pacentro, a medieval village perched at 690 meters above sea level on the side of Monte Morrone, near Sulmona.

Lucky to be in Sulmona again in this year, I decided to see nearby Pacentro in the sunshine. I thought, “I’ll rent a bike for the day and ride there. There’s just a bit of a hill at the end”. Well, there is a hill at the end, but I underestimated it big time.

Riding out of Porta Napoli in Sulmona, I located a small side road that my map promised would rejoin the busier road, the SR487, further along, close to Pacentro. The trip was full of surprises.

I didn’t expect to ride four kilometres on a gravel track only to find a washed-out bridge, causing me to turn back and find an alternative route. But, like many detours, the alternative turned out to be as good, if no better. I pedalled through beautiful small farms on a sunny, late-spring day in the heart of Abruzzo. There were olive groves, fruit orchards, grapevines, dairy cattle, and newly mown hay for the animals.

I passed no other bikes and only one or two cars for the two hours. The ride didn’t require two hours, but I was compelled to stop often and take photos. And that last kilometre was all uphill.

The mostly gravel side road with no traffic!

Getting ready for summer

Pacentro in the distance, with towers visible 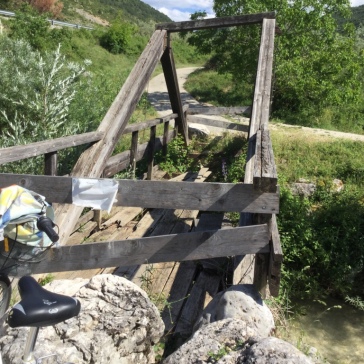 See that weather worn sign saying the bridge is out?

Proud that I hadn’t needed to dismount my trusted rental bike on the final push uphill into Pacentro, I decided to treat myself to a proper sit-down lunch. Not just a panino in the piazza. The first restaurant I came to once in town was Taverna de li Caldora.

Needing to freshen up after the hill, I nipped into the ladies room to behold the best washroom view in Abruzzo, overlooking old tiled roofs towards the Valle Peligna (Peligna Valley).

A glass of local Cerasuola (a rosé from the Montepulciano d’Abruzzo grape) and a bowl of ravioli (sheep’s milk ricotta-filled) were all I needed to replace the carbs spent cycling. It was a Monday afternoon, and though off-season, the restaurant was busy. The buzz of happy lunchers warmed me so, replacing the memory of that rainy June day three years prior.

When I had paid ‘il conto’ I had a look around the other rooms in the restaurant and there was my second surprise of the day. The archway of one room was adorned with awards from the Slow Food movement, one for each of the last 10 years.

The iconic snail on the Slow Food award (appropriately, a dinner plate) indicates that the establishment has been judged by its peers to contribute to the quality, authenticity and sustainability of the local food supply. And all that takes time… 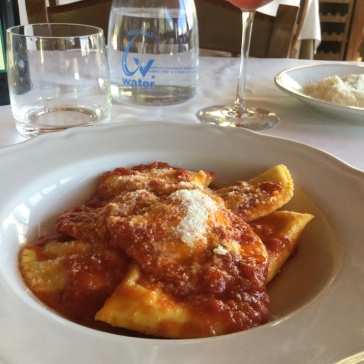 Ricotta filled ravioli, light and satisfying after the uphill ride.

I hadn’t set out to eat in a Slow food recognised restaurant, so I was pleased to support a local business that has a similar food ethic to my own. May the Taverna de li Caldora continue to serve excellent food and collect more snails.

After lunch I left my bike parked and strolled uphill through narrow passages, past piazzas, the local coffee bar, Monday laundry drying on balconies and the parish church of Santa Maria Maggiore.

At the high point of the village sits the Castello Caldora (Caldora Castle) with its three tall square towers and four smaller, round reinforcing towers at corners of a roughly square base. Parts of the castle date to the ninth through 13th centuries, although restorations have occurred as recently as the 1970s. It was closed when I got there so I couldn’t go inside. I later saw a sign post indicating that the Castle is only open by appointment.

My return bike ride to Sulmona was gloriously downhill all the way. I was back to town within 45 minutes, plenty of time for a shower and a museum visit before dinner.