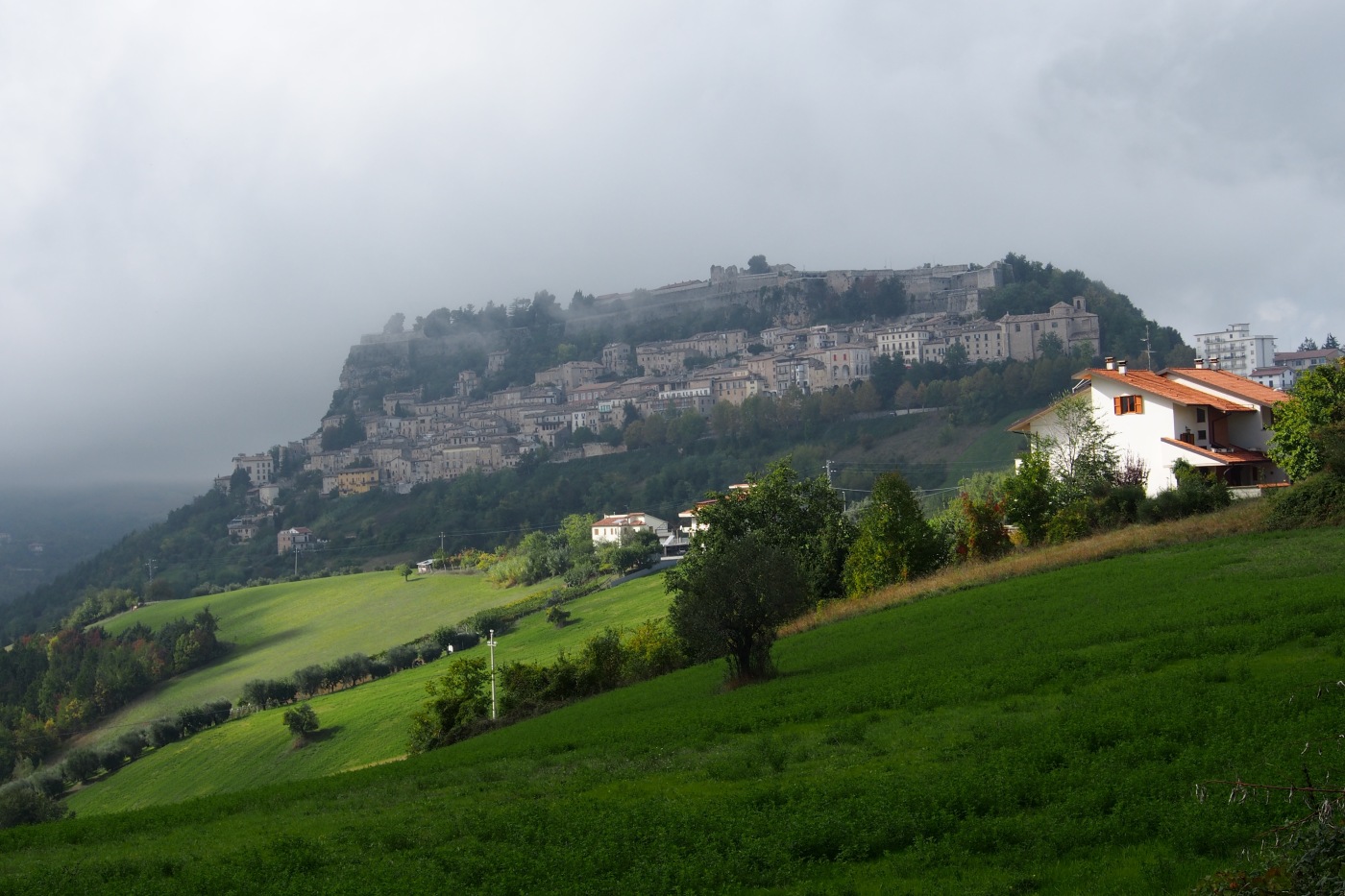 In Part 2 of my post on ‘Visiting Abruzzo’s Teramo Province’ I want to show you a few more towns and the City of Teramo, which is the capitol of the province. These are not as close to the sea as the places in Part 1; instead, they are mostly elevated on the various hills that run along the length of the Apennine Mountains of Abruzzo, or along the river valleys. Some are very near, or within, the National Parks in the province.

Our grandmother Maria Anna Mezzacappa, was born in 1904 in Morro d’Oro, a medieval village 13 kilometres inland from the Adriatic. The fortified village shape is still retained, with houses build right into the city’s old walls.

I’ve visited the town many times but was finally able to enter the comune (municipal office) to inspect birth records of my grandmother. I was also looking for some clues as to her father Nicola’s origins. I confirmed that her birth date was actually two days prior to what we had always believed it to be. This difference was simply that the birth was not registered with the comune until two days later. Oh, and that her birth name was ‘Maria’ Anna, not simply Anna.

I was unable, however, to find any record of her father Nicola’s birth in the register for the years either side of 1874, leading me to think I will need to look in nearby villages where the name is more prominent to this day. Possibly Altavilla and Montorio al Vomano, neither of which I have visited — yet.

Another first for my 2017 visit was to enter the Church of Saints Salvatore and Nicola, the large rectangular church by the main piazza in the town; it had been closed for renovations on all of my four previous visits.  Built in 1331 with subsequent remodelling in the 18th century it still retains the original lancet windows along the side, as well as the original bell tower.

Inside the austere interior there are two 17th century canvas paintings by the artist Francesco Ragazzino and a polychrome terracotta Madonna from the 16th century.

The town is surrounded by green rolling hills, almost entirely covered by vines, olive groves and fruit orchards. This zone is part of the Colline Teramane DOCG area for the Montepulciano d’Abruzzo, arguably Abruzzo’s best known wine. Many other varieties of wine are also produced in the Abruzzo.

Also on the fringes of the town and of note is the Church of Santa Maria di Propezzano with its tall central nave flanked by two newer aisles added in the 1300s. Adjacent is a Benedictine convent, which I have not visited, but which from photos looks worthy of a visit next time. Visiting hours off season, when I usually travel, can be unreliable.

In a previous post I shared many photos of the Giardino Officinale which is near Santa Maria Di Propezzano. You can find that post here. This lovely garden grows about three hundred varieties of herbaceous and perennial shrubs, cultivated for culinary and industrial purposes and also operates as a learning centre for students of all ages. Visits are by appointment. If you don’t speak Italian, take an Italian speaker with you for translation.

In Northern Teramo, on the edge of the Gran Sasso e Monti della Laga National Park, lies the historic little town of Campli. The Collegiate (formerly Cathedral) of Santa Maria in Platea dominates the skyline with its 42-metre tall bell tower (campanile). Though the campanile is from the 14th century, the facade of the church is from the 18th century.  There is evidence that the original tower was not as high; an octagonal section was added in the 1400s and displays decorated tiles. Inside is a beautiful 18th century, painted wooden ceiling. Below ground is a crypt housing 14th-century frescoes.

Many buildings in the town have survived from medieval times.

Campli was the first village in Abruzzo to institute an annual Sagra. A Sagra differs from a Feste in that a Sagra generally celebrates a food or product of the earth, such as a Sagra di Pesce (fish) or Sagra di Ceci (chickpeas). A Feste is more often related to a religious celebration such as a saint’s day. Campli honours Porchetta in the annual Sagra della Porchetta Italica.

There are other points of interest in and near this lovely old town. Churches, prehistoric ruins and more beckon.

We only just scratched the surface in Campli and hope to spend more time exploring the Campli National Archaeological Museum which houses exhibits from Campovolano, where there is prehistoric necropolis.  Campovolano is an important archaeological site with over 600 graves dating from the Bronze Age to the Roman era (2 BC through to the XIII century) and traversing the Italic-Hellenistic civilizations of the Pretuzi and Piceni tribes.

Just a few kilometres from the border of neighbouring region Le Marche and perched on a hill between the Gran Sasso mountains and the Adriatic Sea, is the charming old fortress town of Civitella del Tronto. The top of the hill is dominated by a 16th-century fortress, probably built on top of a medieval castle.

The streets are lined with attractive 16th and 17th-century houses on narrow lanes that wind up through the town.  One such narrow lane way, known as La Ruetta, claims to be the narrowest street in Italy, or ‘la via più stretta’.

From the fortress you can see out to the Adriatic sea in one direction, and out over the mountainous Gran Sasso e Monti della Laga National Park. This park one of the largest single protected areas in Europe and is one of the most biologically diverse areas in Europe. It is also home to a huge array of animals, notably the Marsican brown bear, the Abruzzo chamois and the peregrine falcon.

The town has many other buildings of note including an abbey, a convent and numerous churches in the Baroque, Gothic and Romanesque style.

I’m overdue for a trip to Castelli. The last time I visited was in 1998 with my husband and my older sister.

This medieval hill town clings to the hills below the eastern side of Mount Camicia, which can be seen in the photos below. Famous for the quality and beauty of the ceramics produced in the town, some have even found their way into the Winter Palace of the Hermitage State Museum in far-away St. Petersburg (and one or two can be found at my house in Adelaide, Australia).

Having seem many ceramic jugs, plates and bowls in our relatives’ homes as a child in Philadelphia, and as an adult in Italy, I wanted to see where these family heirlooms had originated. Great uncle (prozio) Vittorio had told us not to miss the ceiling of the church of San Donato, decorated with ‘mailoca’, which are painted ceramic tiles.

The church is up a gravel road on a hill above the town. Our arrival was announced by the crunching sound of our car tyres accompanied by the bells of local sheep we had disturbed. An elderly lady from a nearby house came running up to us with a key ring and let us into the foyer of the church. A gate separated us from the interior.

We waited some time for our eyes to adjust to the darkness inside the church and eventually saw the incredible work on the ceiling. Not wanting to use a flash because it seemed somehow irreverent (this was pre-digital camera and certainly pre-mobile phone camera), we left with no good photos. Hence this Wikimedia Commons photo of the ceiling.

Below are some photos we took in 1998 and later scanned.

The road up to Castelli winds and climbs, but the visit to the workshops and studios of the ceramic artists makes it all ‘vale la pena’, worth the effort.

In 2015 I spent a few days in Teramo with my Sydney friend, Amanda. It was October and the weather was no longer beckoning us to the beaches. Amanda had flown on Ryan Air from London on her first trip to Abruzzo. After some days in Pescara and Navelli I wanted to show her another city with an authentic feel, untouched by tourism. Not hard in Abruzzo, you say, but we also wanted a place with enough indoor attractions in case the threatening rain eventuated.

The name ‘Teramo’ is derived from Interamnia, and is thought to be from a similar Greek word and an ethnic word indicating a place between two rivers.

Teramo is the land of the ancient Praetutii, a tribe of Sabine origin. The area came under the dominance of the Romans by the III century B.C. After that, various European royal houses and influential families ruled the region — from the Spanish, the Swabians (a Germanic ethnic group) and the French via the Capetian House of Anjou. In 1806 Napoleon defeated the troops of Ferdinand I of the Two Sicilies, and Teramo became a French possession until 1815. (This may explain the 21% of French in my DNA).

The population in 2018 was under 55 thousand people and Teramo definitely has the feeling of a small but bustling town. It is perched amongst verdant hills between two rivers; the highest peaks of the Apennines are to the West and the rolling hills and river valleys that run down to the Adriatic Sea are to the east.

The long history and some of the remaining buildings from Roman times give the city the feeling of a larger, busier place, especially on a festive weekend in Autumn. We arrived to a Chestnut festival and were greeted by dancers in traditional costume, weekend markets and the glow of fires warming the pans of Castagne in the evenings. 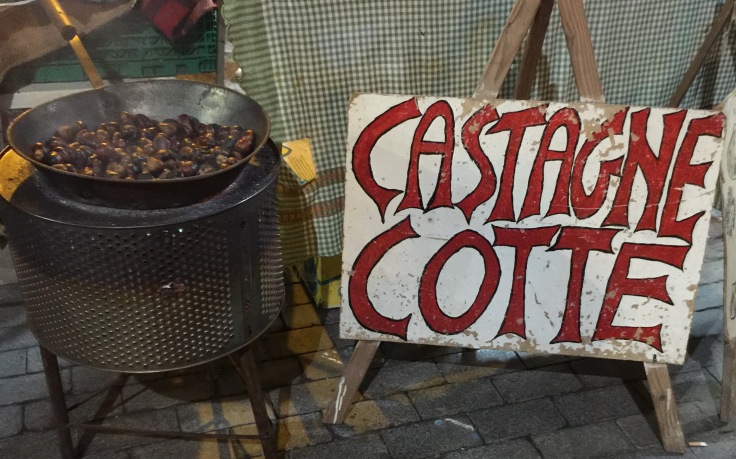 The food was rich and varied, the pastas satiny and delicious.

For those who think spaghetti and meatballs is not really Italian… I give you…Chitarra con le Pallottine. OK, so these are not the huge meatballs you get in Italian-style restaurants outside of Italy, but the concept exists in Abruzzo. The pasta is made by placing a sheet of flat pasta on an instrument called a chitarra (guitar) and using a rolling pin to press the thin strips of pasta through the strings. It’s sometimes called ‘spaghetti (or maccheroni) alla chitarra’. The meatballs (pallottine) are tiny; no bigger than the top of one’s thumb.

Playing an arpeggio on the chitarra

The Cathedral of San Berardo dominates a central piazza and the ruins of the Roman amphitheatre are also just a walk away. Down the main street is also the  Museo Archeologico Francesco Savini, perfect for a drizzly October day.

It is definitely worth staying a few days in Teramo and exploring some of the nearby villages which are rich in history.  I plan to do just that in a few months time…

This concludes my 2-part series on ‘Visiting Abruzzo’s Teramo Province’ but as you can tell, I am not done. I have passed through other towns in the province and hope to visit more places during my next visit commencing in May 2019. If you have been to any of the towns in my post or can recommend others that I should see, please leave a comment and let me know. I want to see it all!