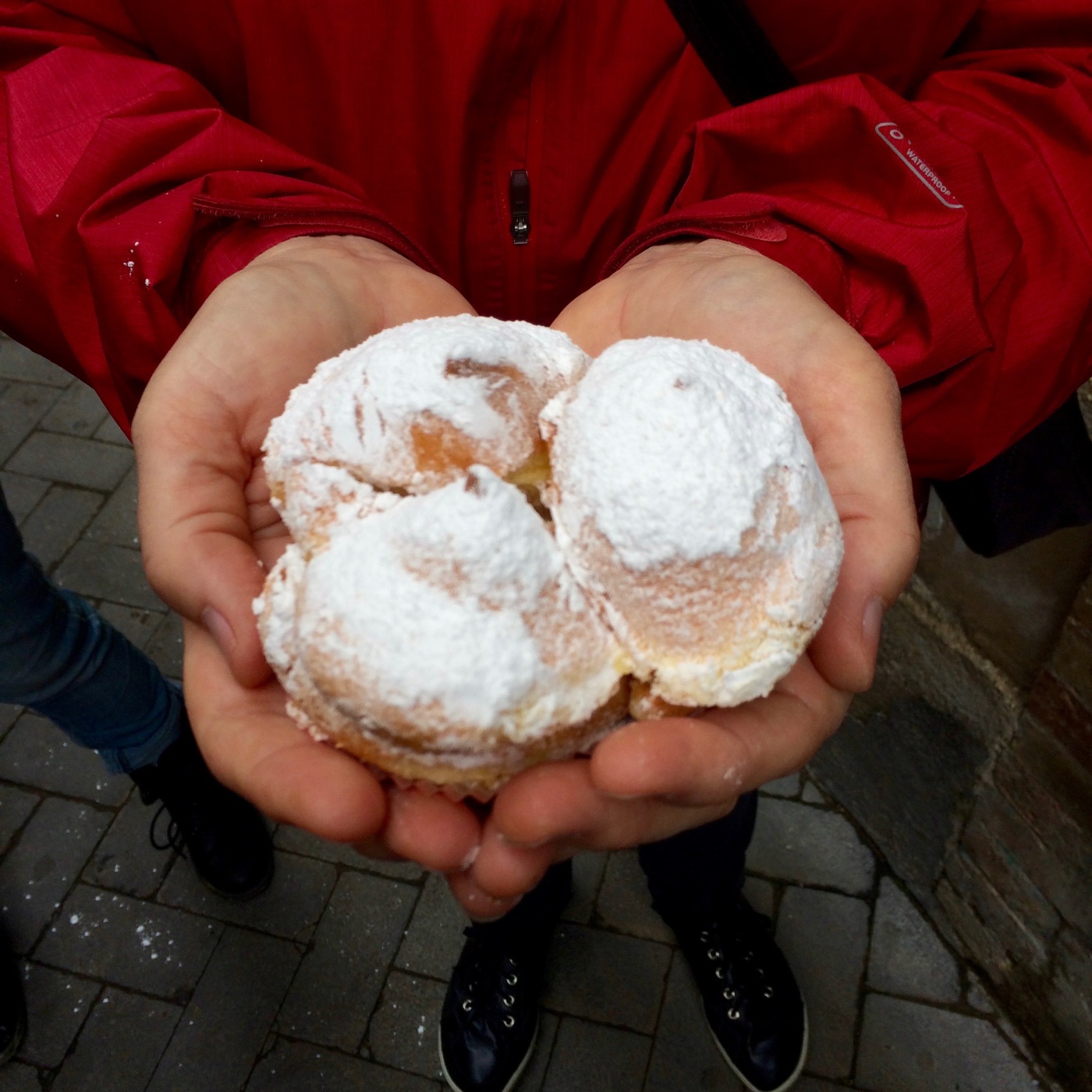 During my recent trip to Italy I organised a half day of food and sightseeing for family and friends with Emiliana of Abruzzo4Foodies. Emiliana is a native of Abruzzo with a passion for travel, food and the Abruzzo region. She runs customised tours in a few languages, including English!

We were staying in Manoppello (see previous post here) and Emiliana suggested a few hours wandering around Guardiagrele about a 35 minute drive away. The town is set in an extraordinary background of the foothills of the Majella mountains and has a population of about 10,000. Emiliana knows this place so well; she can tell you the history, geography, agriculture and customs of the place as well as the food traditions. She has a well established network based on her years of experience living and working in the area.

On Sunday local farmers and producers bring their fruit, vegetables cheeses and meats to sell at tables in the piazza. There are both cow and sheep milk cheeses for sale from the backs of refrigerated trucks. Being early October, there were still plenty of local tomatoes and green vegetables. A van was selling spit-roasted chickens, sausages and, of course, the ubiquitous porchetta (fennel and garlic seasoned suckling pig which is rolled and slow roasted over charcoals or wood).

In addition to food, various shops displayed locally crafted wrought iron and copper home decor and cooking implements. One of Abruzzo’s favourite sweets, the pizzelle (also known as ferratelle or neole) are made on decorative irons held over the fire. One shop had a selection with different patterned pizzelle irons on display.

Guardiagrele’s most famous sweet is indisputably the ‘Sise delle Monache’ or the ‘Nun’s tits’.  The distinctive mound of three cakes is meant to represent how the nuns would stuff their tops to make their breasts less obvious, but actually creating the appearance of a third breast.

Descendents of the Palmieri family (one of the town’s original producers) still make this special treat, not in the original shop though, which has changed hands, but in another shop just down the road. We sampled our Sise delle Monache at Pasticceria Emo Lullo.

Our tour continued between food stops. We gazed upon the Cathedral of Guardiagrele (Santa Maria Maggiore) which is made of the local Majella stonework from the nearby Majella mountains. It was built in the 13th century on the site of a pagan temple (430 AD) with a massive bell tower added.

Most impressive to me were the elegant porches on the outside with a highly decorative sculptural surround on a fresco of the Madonna del latte (Madonna of the milk) and coats of arms of Guardiagrele nobility. There’s also an impressively large fresco of Saint Christopher (patron saint of Travellers) under another porch.

A short walk away is the Monastery of San Francesco parts of which date back to the 14th century.

In the courtyard between the monastery and the church is a peaceful cloister where we enjoyed a tasting of local cheeses, salamis, grilled vegetables and frittata, accompanied by Montepulciano d’Abruzzo wine. As if this wasn’t enough, we were treated to more typical sweets and a liquor called Genziana, made from the root of the gentian plant. Gentian grows in alpine regions and is common in Abruzzo’s Apennine mountains.

I would love to get back to this lovely town one day. Not only does it have a wealth of man-made wonders and delicious culinary traditions, but it’s also a gateway to the Majella National Park.

Ah, what I’d give for another lifetime to explore Abruzzo!